Hey there friends, family, countrymen and/or women. I hope this entry finds you doing well. I guess it has been quite some time since any of us last posted, so I will do my best to fill you in on all that has happened these last few weeks and maybe even a little extra.

It is hard to believe that our stay here in Scotland will be coming to an end in just a month. I remember arriving here back in August to warm weather, long days, and barbeques. Okay, maybe not barbeques, but we certainly spent more time outside. Now, as the seasons turn and the temperature declines, and the darkness of night approaches at an early hour, we find ourselves wondering where these days have gone. Personally, I am looking forward to my departure for home, but I will truly miss this place, these people, and these memories.  What, what am I even saying? We still have a month left!  Sorry to get all somber on you.  I will leave the sad, dreaded, farewell entry to the one who writes later on.  But for now, let me tell you about a wee adventure 2 of my companions and I had the privilege of embarking on just a week ago.

As Kelly made her way to London and other various parts of Scotland with part of her family; Christopher, Timothy, and I took a different route.  We set out to experience life outside of the UK, life among cultures that I never thought I would submerge myself in, life on unfamiliar soil that seemingly impacted us in a most positive way.

We first set out for Frankfurt, Germany where we spent two days living in a not so touristy location.  It was nice really, to be a part of a culture that was actually inhabited by natives and not a bunch of random foreigners taking pictures of everything they came across as though they were peering at the most unique piece of architecture.  This place was nice, a surprise really.  I wasn’t expecting much from Frankfurt, and I won’t say that it wowed me, but I left Frankfurt with an attitude of fine contentment.  The people were most friendly, and the architecture was simple and very German-esque.

From there we set out for Rome, Italy.  The first thing we noticed when arriving in Rome, well for me at least, was the weather!  We left the 45 degree weather in Germany and were greeted warmly by 70 degree Italian weather.  After getting into shorts and t-shirts we enjoyed the famous Roman architecture from the Colosseum, to the Roman forum, to the Pantheon, to the Basilica of St. Peter, and yes, to the Vatican Museum and the painting of the Sistine Chapel.  Oh what a lovely place Rome was.  We even had the special opportunity to meet up with some fellow Geneva College students who graciously prepared a dinner for us and introduced us to gelato. One thing I will say about Rome, don’t take pictures with men dressed up like centurions, and don’t get on the wrong train.

On to Florence we ventured after a wee hiccup with our transportation.  I call it a wee hiccup even though it was probably more than that.  Just when I thought Italy couldn’t get that much more beautiful, we arrived here.  Granted, the Lord blessed with two days of absolute sunshine.  I had a feeling Florence was going to be my favorite place, and indeed it was.  Yeah, experienced the climb to the top of the Duomo, and yes we saw the statue of David, at least one of them.  But it wasn’t those things that made it memorable.  It was the walking around aimlessly looking for better views of the city that made it an experience.  After tirelessly walking for miles we reached a lookout point just outside the center of the city, and as the sun was setting, we caught an incredibly view of the city.  I could only sit in amazement at the handiwork of God at that moment.  The following day we visited the American Military Cemetery just outside of Florence where Christopher’s great-grandfather was buried.  The sun shone through the cemetery and illuminated the gravestones of the thousands buried there.  I know it was special moment for Chris as he looked upon the stone under which his grandfather lay.  I think it’s safe to say that we will all miss Florence and are thankful that we were able to experience that place.

Our final stay was in Geneva, Switzerland which I can’t say I was looking all that forward too, but as we traveled by train through the mountain pass my thoughts were swayed.  I never thought I would have the privilege of gazing out over the Swiss Alps.  The location of Geneva was lovely as it rested below the overpowering shadows of the Alps but just on the shores of a massive lake.  We had the neat opportunity to journey upward to the mountain by way of gondola, and hiking just a wee bit further through the woods and valleys, we reached a lookout point upon which we could see the entire city of Geneva below us and after slowly turning around could see the snow-capped Alps beyond us. Yes, Geneva is expensive living, but the creation around you cannot be price tagged.

I can’t speak for all of us, but for myself I will say that this trip was nothing short of a blessing.  To see the foreign lands that God has so creatively designed and to meet distant people that God has so uniquely formed is a special privilege, and I will always count it a blessing.  Traveling is something that has always intrigued me, but to really do it, and to really live in these unfamiliar cultures, among these different people is an experience I will forever cherish.  Thank you, Lord. 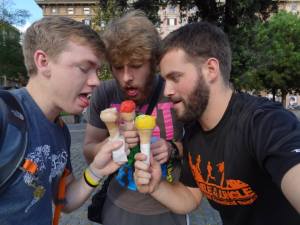 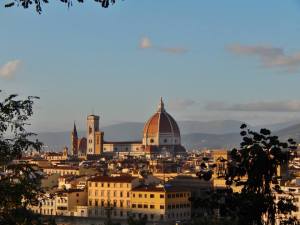 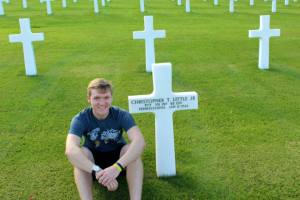 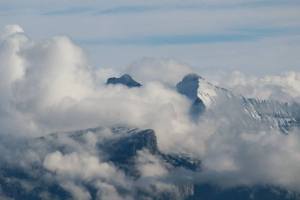 This week began at a young adult weekend in Arbroath. We made more new  friends and got to spend some time with others that we already knew. The speaker, Rev. Blaize, spoke on the topic of Christ’s work on the cross, and what his blood means for us, titling his series “Christ’s Precious Blood.”  The week continued with our usual classes and a trip on Wednesday with Graham to Culross Abbey and Palace, and Castle Campbell.   Thursday night the four of us headed into Glasgow to see the opera Don Giovanni, and Friday ended with Nate and Christopher giving their testimonies at the Covenanter Youth meeting.

The topic of redemption seemed to carry through the week from the retreat to the opera. Reverend Blaize spoke passionately on how Christ drank the entire cup of God’s wrath down to the last drop, taking away God’s wrath against any who will repent and believe in Christ as Lord and Savior.  He shared how Christ’s death redeemed us from our slavery to sin and from the power of the law to condemn, making it so that we can freely obey and love God in gratitude for what he had done.

Our systematic theology class this week strengthened the lessons on Christ’s redeeming work. We learned about how it was necessary for the sacrifice for our sin to be both God and man – it had to be God because man does not have the ability to pay for his sin against God, but it had to be man because it was man that had committed sin against God. Because Christ is the only man who is also God and who lived a sinless life, he was the only option for removing God’s wrath and obtaining our redemption. Thursday night we were given a visual reminder of what happens to those who refuse to repent as we watched Don Giovanni.

The story of Don Giovanni illustrates man’s sinful nature and need for repentance. Don Giovanni is given many chances to repent of his misdeeds, but he refuses to do so and in the end is dragged down to Hell for his punishment. The moral of the story was that those who do evil will be damned. Perhaps it was intended to say the opposite as well – that those who do good will be saved. As a Christian I cannot agree with the latter, since all men are sinners (an important part of sharing the Gospel, as we’ve learned in our evangelism class) and must recognize their sin, repent, and accept Christ as their Lord and Savior for salvation. However, the former moral stands strong from a Biblical viewpoint. One of my companions commented that there was no redemption in the plot of Don Giovanni, and I must agree that it was lacking due to the absence of repentance. Though Don Giovanni fails to tell the sinner how to be redeemed, thankfully we have the Bible to show us the full story of Redemption and guide us to eternal life!

At the cliffs of Arbroath 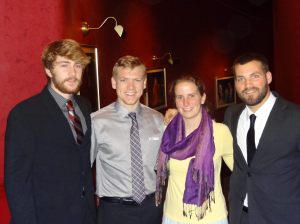 Going to the Opera 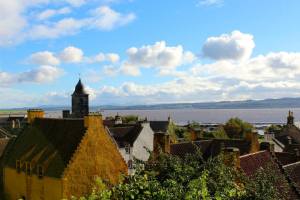 Learning and growing through experiencing life in another culture, and through interaction within a church that Christ is building into a living, dynamic body.

For more information visit:
www.geneva.edu/semester-in-scotland/
or
email us at semesterinscotland@gmail.com